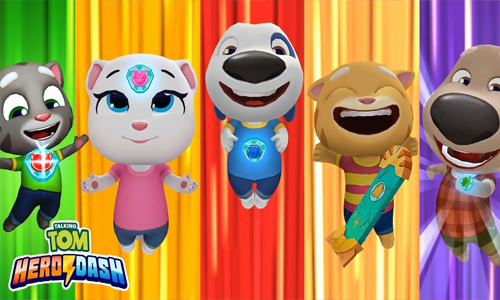 Maybe you’ve played with the OG Temple Run. You might have even checked out Subway Surfers when it came out. Talking Tom: Hero Dash portrays our favorite feline Talking Tom in a different package. Together with Talking Angela, as well as their other friends, they’re back for a different adventure – all that rubbing their stomachs and feeding them have turned them heroic, and they’re going to need your help to chase after bad guys and get all those gold back.

But really, how much original can a game like this be, or how would it fare against games with better graphics? Let’s take a deeper look and find out.

Dashing for the Gold – Tom on an Adrenaline Rush

Really, it’s a Tom-themed game that’s disguising itself as a parkour running game. Players can control the movement of Tom, and he’s supposed to be – flexible. After all, he is a cat. The movement and the controls seem to be well-optimized for the game. You can use Tom, Hank, Ben, and Angela as characters to chase down the burglars and do the work for you.

It’s a welcome departure from the usual Talking Tom game as well. Frankly, we all know he’s in need of a little exercise, and what better avenue for him to get that but in this game? He jumps, dives, gets the coins and also gets the bad guys at the end. It’s a welcome training.

Crisp Graphics for the Graphic Crowd

You’d be surprised just how dedicated the team behind Talking Tom Hero Dash is when it comes to graphics for this game. The 3D rendering is just right – you can run and see the details that they’ve put in every piece of the coin and every old-fashioned villain at the end of the course. There are also different kinds of terrain that tests the reaction of players, and it’s not hard to react to avoid – you can see them clearly, so it’s a win-win situation for both player and those who are after the graphic experience.

The Gameplay could use A Little Fine-Tuning

With all the praises that it has received, there is still a little room for improvement in a game like this. Don’t let the running controls and the crisp graphics fool you. There’s still a little difficulty with the stages where you need to side-slip because the controls are a little tricky to master. However, with the repetition and stages where there is actually that requirement, players can get plenty of practice to master Talking Tom Hero Dash.

Even if you’ve managed to finish the game, save the world, and your pockets aren’t completely empty, that doesn’t mean you can’t play it again. You’ll find that there are still raccoons that have escaped the long tail of Tom’s justice. You can go back and take coins and gems to solve more of these problems. Your score multiplier also goes up after defeating them, so go ahead and take them out, by all means.

With all the color combinations, the plot to save the world, and to rescue it from the pesky raccoons, Talking Tom Hero Dash is a must-have game. If you’re thinking that it’s only for the kids, you’re dead wrong – you’ll find endless hours of replaying it again and again in what some might think as ‘child’s play’. 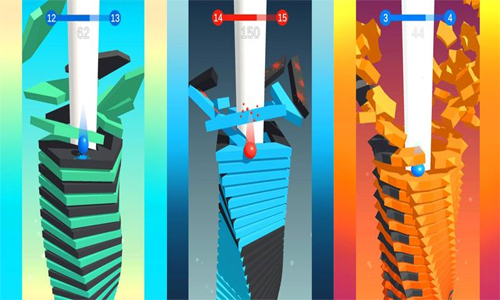 Smash, Bounce, and Bump on Platforms in Stack Ball – Blast Through Platforms

October 6, 2020October 15, 20203 min read
Got some idle time on your hands with nothing to do? In a time before gaming on phones, there was something called “crosswords” or even